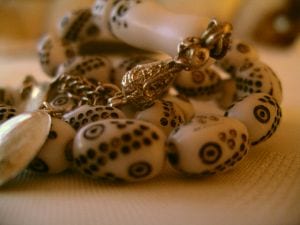 What is light on the tongue but heavy on the Scale? Dhikr, the remembrance of Allah

During the hustle and bustle of our frantic lives, the day seems to go by so quickly that it is not until a rare quiet moment late at night that we may realize we have not remembered Allah

throughout the day. Apart from the five daily prayers (which themselves are forever threatened to be rushed through or forgotten), did we take a single moment from our day amongst the creation to remember the Creator? Did we actively seek Barakah or allow the opportunity to pass us by?

A flimsy “Alhamdulillah” may slip from our tongues but a little reflection may go with it. The lack of dhikr, or remembrance in Allah, can be blamed on mismanaging time, working hard on our business or forgetfulness; but the truth is, we may not truly understand the weight of these short words or phrases on our hearts and souls. And the rewards!

describes the incentives of remembering Allah

throughout or day. Basically, if you remember Him in this life, He will remember you (and grant you wonderful things) in this one and the next.

Below is a short list of some dhikr/remembrances that you can incorporate into your day. The goal is to make these beautiful praises of the Creator come up from your heart and roll off of your tongue with ease.

1. Quran: Ultimately, the best dhikr is reading the Quran.

You will be rewarded 10 rewards for each letter read.  This prize basically illustrates the weight of the Quran in terms of where it should be in your life and the importance you should give it. Seeking Barakah of the Qur’an is worth more than hustling to increase our social status or profit margins – these things will die with us in this life and will add to nothing to us in the next if they weren’t mindful, done with the right intentions and aligned with our purpose in life.

(“I praise Allah (or All praise if to Allah) above all attributes that do not suit His Majesty.”)

A tree will be planted for you in Paradise.  Nice!  Start growing your own forest right now! Another hadith relates that whoever says this 100 times a day, his/her sins will be forgiven even if they were as much as the foam of the sea [Bukhari].

(“All praise is for Allah”)

Your scales will be tipped on the Day of Judgment, full of rewards!

“I praise Allah (or All Praise if to Allah) above all attributes that do not suit His Majesty. All praise is for Allah. There is no deity worthy of worship besides Allah. Allah is Great.”

This combination of dhikr is the one most beloved by Allah, subhana wa ta’ala.  When you say them, sins fall off of you like leaves off of trees.

Abu Hurairah (May Allah be pleased with him) reported: The Messenger of Allah (ﷺ) said, “The uttering of the words: “Subhan-Allah (Allah is free from imperfection), Al-hamdu lillah (all praise is due to Allah), La ilaha illallah (there is no true god except Allah) and Allahu Akbar (Allah is the Greatest)’ is dearer to me than anything over which the sun rises.” [Muslim].

passed by a tree with dry leaves, so he struck it with his staff, making the leaves fall. Then he said:
“Indeed, ‘all praise is due to Allah, (Al-Ḥamdulillāhh)’ ‘glory to Allah, (Subḥān Allāh)’ ‘none has the right to be worshipped by Allah, (Lā Ilāha Illallāh)’ and ‘Allah is the greatest (Allāhu Akbar)’ cause the sins to fall from the worshipper, just as the leaves of this tree fall.” [Jami` at-Tirmidhi]

You will enter through a special door in Paradise for those who oft use this remembrance.

Qais bin Sa`d bin `Ubadah narrated that his father offered him to the Prophet (ﷺ) to serve him. He said: “So the Prophet (ﷺ) passed by me, and I had just performed Salat, so he poked me with his foot and said: ‘Should I not direct you to a gate from the gates of Paradise?’ I said: ‘Of course.’ He (ﷺ) said: ‘There is no might or power except with Allah (Lā ḥawla wa lā quwwata illā billāh).’” [Jami` at-Tirmidhi]

Can be recited after salat and before you go to bed/sleep. (“I praise Allah (or All praise if to Allah) above all attributes that do not suit His Majesty.  All praise is to Allah.  Allah is Great.”)

We know that this dhikr is said after each salah, but when Fatima

the daughter of the Prophet came to her father requesting a servant to help with the household, the Messenger of Allah

told her to repeat the dhikr before her sleep and the results would be better than having a servant.

Abu Huraira reported that Fatima came to Allah’s Apostle (ﷺ) and asked for a servant and told him of the hardship of household work. He said: You would not be able to get a servant from us. May I direct you to what is better than the servant for you? Recite Subhaana Allah thirty-three times, al- Hamdu li-Allah thirty-three times and Allah-o-Akbar thirty-four times as you go to bed. This hadith has been narrated on the authority of Suhail with the same chain of transmitters. [Sahih Mulsim]

You will get protection from Allah’s punishment.  In Surah Nuh, ayah 10-12, Allah relates the story of Prophet Nuh

and how he instructed his people to seek Allah’s

forgiveness.  If they would just say “astagfirullah,” Allah would send them rain in abundance, and increase their wealth and children, and give them gardens and rivers in Paradise.

“And said, ‘Ask forgiveness of your Lord. Indeed, He is ever a Perpetual Forgiver. He will send [rain from] the sky upon you in [continuing] showers. And give you increase in wealth and children and provide for you gardens and provide for you rivers. [Qur’an 71: 10-12]

When you recite this verse before you go to sleep, Allah sends a guardian to you and no shaytan will come to you until morning.  Those who read this after each salah shall enter Paradise.

Narrated Muhammad bin Sirin: Abu Huraira said, “Allah’s Messenger (ﷺ) put me in charge of the Zakat of Ramadan (i.e. Zakat-ul-Fitr). Someone came to me and started scooping some of the foodstuff of (Zakat) with both hands. I caught him and told him that I would take him to Allah’s Messenger (ﷺ).” Then Abu Huraira told the whole narration and added “He (i.e. the thief) said, ‘Whenever you go to your bed, recite the Verse of “Al-Kursi” (2.255) for then a guardian from Allah will be guarding you, and Satan will not approach you till dawn.’ ” On that the Prophet (ﷺ) said, “He told you the truth, though he is a liar, and he (the thief) himself was the Satan.” [Sahih Al Bukhari]

Use these adhkar (supplications) often and mindfully as a way of seeking Barakah and being in Allah’s presence. Say them as you draw close to your Creator and He will always remain by your side.

Amira Murphy is an educator and aspiring writer who has been benefitting from Productive Muslim since the website was first launched.  She enjoys writing about forgotten and neglected practices from the Prophet’s Sunnah

, health and nutrition and green and sustainable living.